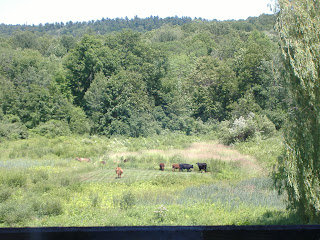 June 23, 2019 - Holy cows! In the midst of one of their projects, Marilyn & Joie caught sight of a very large black animal ambling along a path in the back yard. "Bear!" Marilyn shouted, with a mix of concern & pleasure that they were finally getting to see one of the animal visitors all the other neighbors had sighted. But then more big creatures (of varying shades of black and brown) came out of the woods.

"No, they're COWS!" Joie retorted in a gleeful tone and counted 7 of them, now contentedly grazing in The Viewing Circle. For those of you who don't know Joie, as much as she loathes snakes and large birds, she adores cows.

While Marilyn grabbed the camera, Joie found the number to the police department...not to report trespassers but to ask for help herding them away from the highway beyond the house.
Note: Joie actually told the dispatcher, "We got a coupla big ol' heifers in our back yard!" Apparently, spending all those years in Texas left its mark on her in more ways than one.

A very nice police officer arrived quickly, followed a bit later by the rather petite wife of the owner of the cows. It turned out that a tree had fallen on their fence about a mile or so north of Chateau de Joie and their small herd had taken the opportunity to check out whether the grass really was greener on the other side.

Unfortunately (because Marilyn & Joie really wanted to see the little woman handling the huge cows with nothing but a bucket of feed), the critters had already turned back into the woods from whence they came. Since they haven't returned, the gals felt sure the behemoth leader of the pack led them home without any human assistance.
Posted by Marilyn 'n' Joie at 11:16 AM No comments: