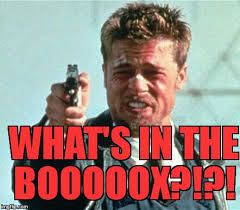 Jan-Feb, 2019: What's in the box? Joie's reaction to her discovery of a mysterious box was about the same as Brad Pitt's had been in Seven -- a freakout of monumental proportions!

"It's the Plague of a Thousand Deaths," she screamed, recalling the tales of those who had accidentally inhaled the lethal exhumations of an Egyptian tomb. Yes. It was that bad.

It all started with Joie's need to demolish a wall before the start of the new year. When the transition is complete, the whole story will be related in a blog tentatively titled "Bar Crash 101." But the "What's in the box?" mystery began when the removal of a section of old paneling revealed an air/heat duct (marked with a suspicious white X in the photo). The rectangular holes in the floor are air returns that had been covered by the former built-in bar. 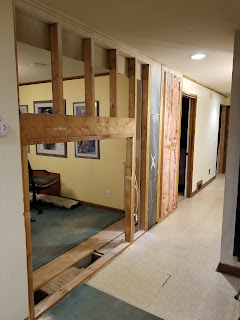 A thorough investigation determined that the surprising duct came off the main shaft from the furnace in the basement, ran straight up the wall between the dining room and hallway into the attic, crossed over twenty+ feet of the attic floor toward a hole that opened into the kitchen below.  However, the duct was disconnected from the hole.

The Campbell gals had been told the vent in the kitchen ceiling (only about 10 linear feet from the duct in the hall) was an old "fresh air" vent that opened into the attic for cooking fumes and smoke to go up, a function which was actually handled by a new exhaust duct they'd had installed above the stove. Since no air, hot or cold, came out of that vent, it had made sense to seal it off so that nothing undesirable could travel from the attic to the kitchen.

It should be noted that, even if the duct had been properly connected to the vent, the attic is too cold in the winter and too hot in the summer for the heat or cooled air to reach the kitchen by such a long, circuitous route. 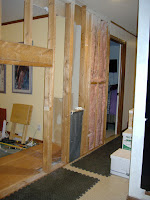 The next logical step in demolishing the wall was to remove the duct that served no apparent purpose. Thus, the Reno Queens received another shock when they were greeted with a flow of heat powerful enough to warm the entire upstairs!

After moving into Chateau de Joie, the gals had the original furnace and a/c system replaced with a brand new (very expensive) system, but since their living space was never as warm or cool as it should have been, it was assumed that, as Floridians, they were expecting too much, or perhaps the lack of exterior wall insulation and old windows were the culprits. A mere 4 years later they learned the truth -- a good amount of the heated or cooled air was going straight to the attic!


Now you're probably wondering what any of this has to do with Joie's encounter with a mystery box. Well...as soon as she realized one major thing was wrong with the ductwork, she decided a complete tracking of the entire system was necessary. By spending a lot of time on ladders and inspecting the crawl spaces with flashlights, several ducting problems, including more disconnected supply lines, were found and, at least temporarily, rectified (a lot of duct tape was involved). Unfortunately, the coldest room in the house held a secret just as bewildering as a main duct delivering heat to the attic.

A rusty old grate very high on an exterior wall of that chilly room seemed to be part of an original clothes dryer vent, but it had been rigged to connect to the main air return to pull fresh air into the system. In reality, that "fresh" air is freezing half the year, which resulted in an ice-cold draft being continuously pulled into the crawl space above the room...solving the mystery of why that room was the coldest in the house.

Behind the rusty grate, a metal duct piece passed through the wall and connected to a large, home-made cardboard box covered in foil with a rusty metal handle on one side. The odd contraption was hung by wires from the rafters. With Marilyn on a ladder outside in the cold working to remove the grate and metal duct piece, Joie worked from the inside to separate the weird box from the other end of that piece.

At the moment of separation, a blast of ancient black dust hit Joie in the face. And that's when she screeched something about the Plague of a Thousand Deaths.

After all that, the Reno Queens were incredibly disappointed to discover the box was empty, giving no clue at all as to its purpose or what the metal handle was supposed to turn. There was nothing left to do but add the box and its accessories to the growing dump pile...then race to the decontamination showers.

UPDATE April-June: This project turned out to be a near deadly disaster as Joie became more and more ill until she couldn't even get to campus to teach her classes. Her description was that she felt as though she was being eaten from the inside out. A lot of doctor appointments, followed by a lot of tests, finally revealed that she had multiple bacterial infections, so the "plague of a thousand deaths" wasn't so funny any more. As of June (after a lot of heavy antibiotics), she is almost, but not completely back to normal, still fighting one last issue. Needless to say, no more destruction work without a mask!