November 15, 2018:  Picture it -- Evening. All five residents of Chateau de Joie are comfortably full from a high-carb dinner and relaxed from a variety of beverages, lounging in front of the television, watching the Cold War cult classic, "Dr. Strangelove." Suddenly from the back yard came a disruptive...BANG!

"That sounded like a shotgun," Joie warily stated without moving from her comfy position.
Marilyn frowned. "It's not hunting season...except for coyotes."

That got Joie, James, Chris, and Brittany rushing to the picture window and pulling back the curtains (Mama Marilyn chose to stay put since she knew whatever might be visible in the dark would look the same from her spot on the couch).

To everyone's surprise, colorful fireworks lit up the sky, not precisely in our back yard but very close by.
Guesses were immediately tossed about. "Is it a holiday?" "Something going on at the golf course?" "An event at UMass?" "A Puffer's Pond Party?"

The display stopped a few seconds later and, a second after that, Brittany pointed outside and simply said, "Look." And because everyone was vulnerable to suggestion, they did, and saw... 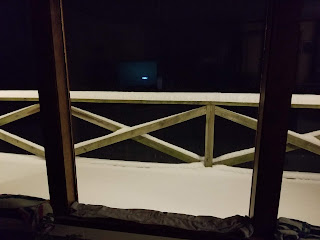 Apparently someone out there thought the somewhat early arrival of the frozen wet white stuff was worthy of a noisy announcement. Not everyone in the living room agreed. But once Joie noted that sledding would soon be possible, the grumbling stopped (temporarily) and the movie was given the attention it deserved.
Posted by Marilyn 'n' Joie at 3:44 PM No comments: 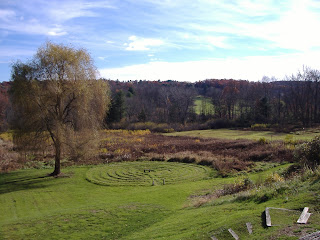 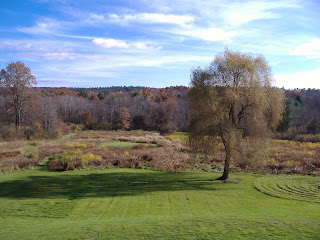 November 8, 2018: Just for the record - No brush hog/field mowing this year or even a final mow of the lawn due to the fact that the entire rear of the property has standing water. Today is one of the few days we've seen sunshine since June so the Reno Queens took the opportunity to take pics. Fingers and toes are crossed that this year's soggy, dreary weather was a fluke and not a new meteorological trend!

Meanwhile, this week's mid-term election results have the Campbell gals smiling in spite of the disappointing summer and fall weather - so many encouraging firsts regarding women with a range of ethnicity as well as LGBT wins! Sending all the victors wishes for a successful future. Click the link below for the Washington Post synopsis: