June 30, 2018: Bartering is a beautiful thing! Because of such an exchange, the Reno Queens just got to take care of an item that had been on the Chateau de Joie's to-do list for 4 years without ever nearing the priority level. With the necessary material and tools in hand, and the help from an extra pair of hands (namely those of former housemate Katherine), the deteriorating metal screen on the upstairs porch was ripped down and new, nearly invisible screen was put up.

Although it is still only a temporary fix since the entire porch and its roof must eventually be replaced, at least the magnificent view is now less obstructed. The photos below were taken in the same amount of sunlight & nicely show how much clearer the view is through the new screen!

* Note: Apologies to Katherine, who is no longer a grad student as she graduated last spring and is well on her way to a sparkling career as a professional historian, but Mama Marilyn could not resist using the old joke in the caption.
Posted by Marilyn 'n' Joie at 5:01 PM No comments:

Email ThisBlogThis!Share to TwitterShare to FacebookShare to Pinterest
July 15, 2018: A just for the record post...
Unlike last summer, the summer of 2018 is not one of multiple major renovation accomplishments due to several factors. The most important reason is that most of Joie's time is filled with traveling to and from  academic conferences and multiple library archives where she is conducting research for her doctoral dissertation. 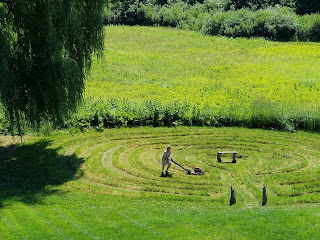 Marilyn's excuse is based on the fact that Mother Nature seems to be angry with her this year. Within a ten-day period - while mowing the labyrinth, she disturbed some bumble bees, which stung her left ankle 9 times resulting in considerable pain and swelling, while trimming the bushes by the front door, she disturbed a nest of yellow jackets, which turned her upper right arm into a fat red balloon, and while weeding she failed to recognize a type of poison ivy, came in contact with it and spread it to various spots on her legs and arms before scrubbing the toxins off.

Adding to all that are temperatures rising as high as 112 degrees and the almost new air conditioning system stopped cooling on July 3rd, the day before a holiday. An emergency service call was required to discover that a rather long milk snake had somehow gotten into the outside condenser (which is up on blocks and has no ledges to  be climbed by any critter let alone a snake) and wrapped itself around the fan blades until they stopped moving and shut the system down.