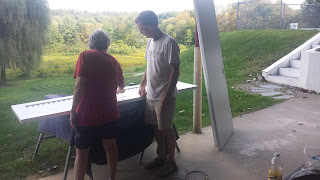 Joie and Marilyn believe one can never have too much storage space and true closets have doors. Thus came the one improvement to the downstairs apartment that involved almost every area.  See contractor Ryan-Regan Ladd being patient with Marilyn's inspection of the new louvred door for the shared bathroom.


But before closet door installs began, Joie had an IDEA!
At the bottom of the stairs, before entering the apartment or the laundry/workout room, there was a sizable area of dead space. So she asked Ryan to convert it into additional closet space for the master suite...with her help, of course.
The first step was to remove the "back door" into the suite and the old flooring in the wasted section of the foyer.
Next came building a new frame and drywalling that on both sides.

Aah, but Joie was not yet done with her closet ideas for the suite. There was poorly-used space under the stairs as well. So she put her strength and determination into tearing out all the unnecessary wood (including a built-up platform that hid things she'll never be able to unsee) until it was down to the bare bones. 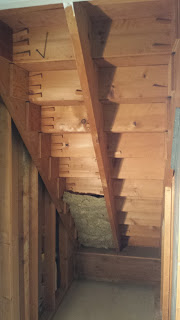 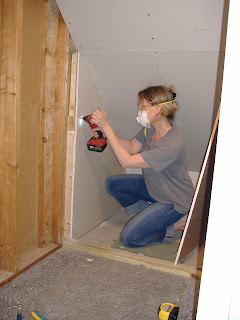 Having successfully passed Ryan's Drywalling 101 class on the other side of the apartment, Joie tackled the challenging job of drywalling and soundproofing what would become the slanted ceiling of another new closet space.
FYI, the low space at the back became a usable storage space on the basement side.

While Joie's efforts were focused in the suite, Ryan installed sliding closet doors in each bedroom (there were none before) and replaced the old, solid closet door in the shared bathroom with a louvred one to provide air-flow. 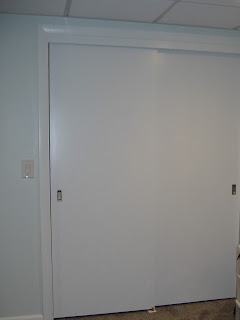 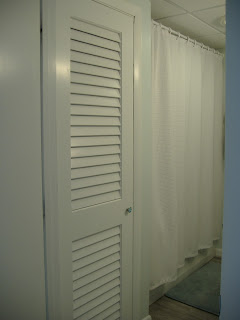 Now those are finished spaces!

April 16, 2018: Another just-for-the-record post -
Dear Mother Nature,
The first day of Spring was a month ago. There are robins all over the yard. The deer family has come out to feed. The crocuses are blooming and the daffodils and lilies are poking their fingers out of the ground.
And yet THIS is what you gave us today... 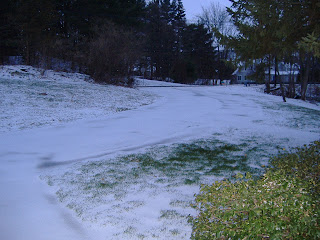 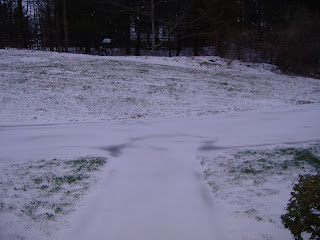 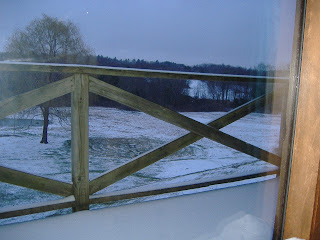 Just wanted you to know, WE ARE NOT AMUSED!!!