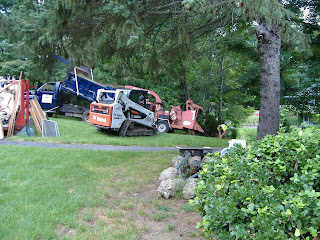 July-August, 2017: Chainsaws, Tractors, Elevating Lifts, a Giant Chipper and an impressive amount of manpower were needed for the major outdoor job done this summer. Three old (and unfortunately very sick) trees had to come down (they threatened the roof of the house) and several decades of thorny bramble and overgrown weeds really needed to be cleared away. Since this was all well beyond Joie's and Marilyn's skills, they continued working on interior renovations and hired pros.


But they cheerfully complied with Joie's request to be able to keep a slice or two to make a table. The 2 smaller pieces are from the scraggly crab apple tree hanging over the pool...NOT the best place for a leafy, flowering tree. 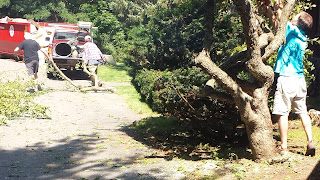 A second crab apple tree at the front south corner had to be taken down as well, but this one was done by Team Campbell with our fave contractor Ryan Regan-Ladd in control of the chainsaw.

Some of the less dangerous tasks, like hauling the cut branches to the dumpster (at right), trimming lower tree limbs and pulling weeds, were managed with the generous help of Joie's dad, John, and brother, Jake, who came for a visit despite the warning that they would be put to work. (Not sure they expected it to be as strenuous as it was but they were troopers.)


Marilyn voted to leave the trunk in place as an art piece, but she lost to Joie's insistence that they were eliminating dead things on the property, not memorializing them. 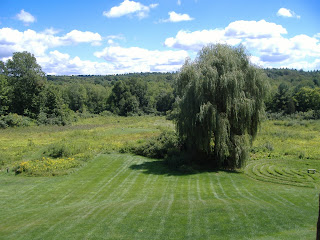 There was one area we had unsuccessfully tried to get cleared for three years. The "area" was a tangle of wild mini-rose bushes and a plethora of other weeds and saplings. Unbeknownst to Marilyn or Joie (who is lethally allergic), it was also home to a giant hornets' nest. Since it was very close to the grand willow (the dark green clump to the left in the photo), it was not easy to tell how big the thorny stand was until one got close enough to see that it was about 20 feet in diameter and at least that high. 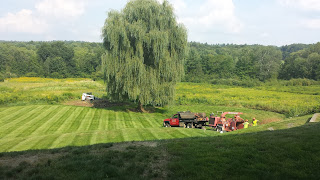 It was also impossible to see that there was a small pond behind it where ducks and geese stopped for a rest.

It took the Greenscape team about three days, but they achieved what others could not. 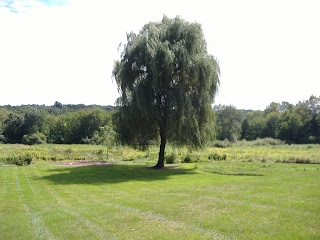 Ta-dah! Not only can we see the pond but a strong sumac tree was unveiled.

Although there is still plenty planned for the outside property, it will have to wait until next summer. After all, winter is coming ...
Posted by Marilyn 'n' Joie at 3:21 PM No comments: 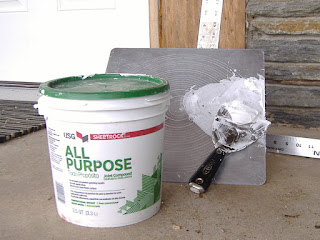 July-August, 2017: It's all in the wrist.
That's what contractor, Ryan Regan-Ladd told Joie when she asked him to show her how to "mud". Those of you who knew Joie as a child might remember just how fond she was of playing in mud, so her interest might not sound new.

But this particular kind of mud, formally called joint compound, was part of her newer interest in learning how to do drywall...and that interest was triggered by the fact that we had just gutted a large portion of the downstairs apartment. 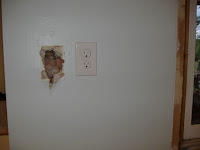 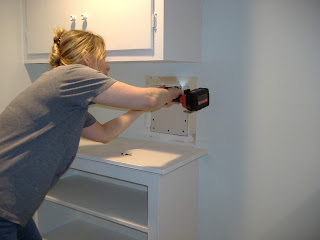 First things first, however. Joie's training began with patching holes. There were holes of different sizes and shapes in every room--some were caused by the removal of intercom speakers, telephones, outlets, fire alarms and in-wall vacuum connections (the original owners were quite high-tech for the early 1960s). Others were caused by sledge hammers and crow bars that didn't quite hit their target. Marilyn's solution for the past three years was to cover them all with pictures, calendars and mirrors, but she wholeheartedly endorsed Joie's intention to "do it right". 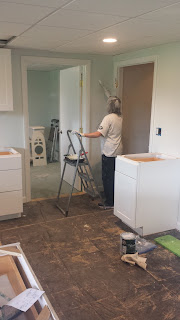 The methodology is quite logical but Ryan had to explain it step by step to the newbie: 1) cut a piece of drywall larger than the hole & big enough to reach at least one stud; 2) trace the outline of the piece over the hole and cut along the lines;
3) as needed, secure 1 or 2 pieces of 2x4 pine into the frame for the new drywall piece to be screwed into; 4) tape all seams and smooth mud over tape then over entire patch 3 times, letting it dry completely between each layer (this is where the special wrist action comes in); and lastly-- gently sand and wipe surface of patch to remove any dust then prime and paint... which was the only part Marilyn felt confident doing. 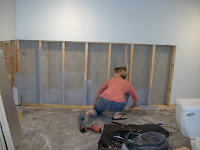 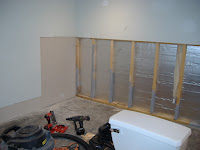 After a thorough inspection by Mentor Ryan, Joie was allowed to graduate to whole walls, which started with replacing some rotten studs, blocks and bottom plate, and continued on to cutting and fitting rigid foam board and/or insulation between the studs. 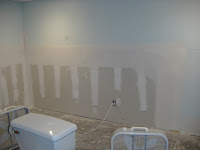 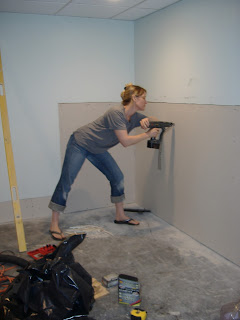 A screw gun is the professional way to quickly secure large sheets of drywall to the studs (try not to think too deeply about the combination of Joie and a gun of any sort). And finally, the mudding process proceeds the same way as with patches.


The advanced drywall lesson came in connection with turning a grungy under-stairs crawl space into a usable closet that would bring a tear to Harry Potter's eye...but that story deserves a whole post of its own.