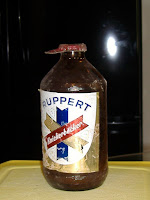 It takes guts to gut a bathroom, especially one in a basement, but Marilyn, Joie and their contractor pal Ryan came up with a way to add some fun to it! The pic at right is of 1 of 6 antique beer bottles discovered hidden in the bathroom walls. According to eBay, the baseball hat bottle cap is worth about $10. Read on to see how that inspired them to "pass it forward". 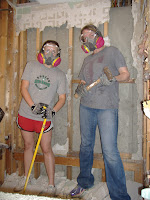 The last post included a few pics of the demolition that started with Marilyn and Joie searching for the source of the foul odor. To the left are Joie and former housemate/colleague Katherine standing in what used to be the old cast iron tub with 3 walls of tile. Before a new, modern tub/shower could be installed, everything down to the studs & concrete walls had to be gutted.

Once the broken pipe under the sink was discovered, the rest of the bathroom walls had to get the same destructive treatment.

Next came the rigid foam board for the external walls, which Ryan taught Joie how to measure and cut for a precise, dampness-resistant fit. 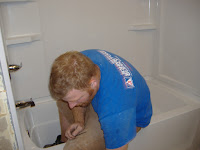 Favorite plumbers, W.S. Pickering & Son in Amherst, had already installed the new power flush toilet and now they had to replace all the pipes and install the tub. 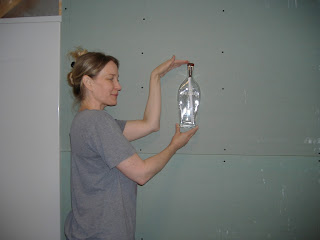 But here's where the fun came in. Because of the curious finds of beer bottles during the demolition stage, Joie & Ryan decided they should pass on the surprise by putting something in the wall for the next owner to discover. Soooo, before putting up the drywall on the wall between the under-construction bathroom and one bedroom, an Angel's Envy bourbon bottle (sans boubon) was tucked into the soundproofing insulation. Inside the bottle was a secret message: 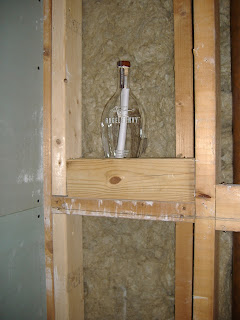 "This message in a bottle was surreptitiously hidden on July 13, 2017 by Joie Campbell, Marilyn Campbell and their extraordinary building contractor, Ryan Regan-Ladd. During the process of totally gutting and rebuilding the downstairs apartment, we uncovered 6 empty, antique beer bottles with tiny metal baseball caps for lids (circa 1960s) and decided to pass on a similar surprise to the next resident renovator. Our renovation adventures are related in a Google blog titled "Rural Renovation Diary". If humanity survives the coming zombie apocalypse and the internet still exists when this message is found, perhaps you'll read about the dramas, traumas and giggles of a mother and daughter renovating an old house in the country with no previous experience --  www.citygirls2countrysquirrels.blogspot.com." 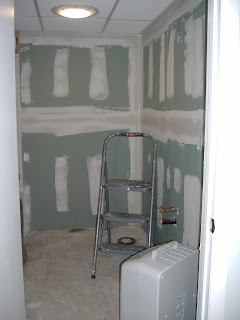 And then there was drywall...


And finally, Joie and Marilyn are very pleased to present the renovated bathroom -- 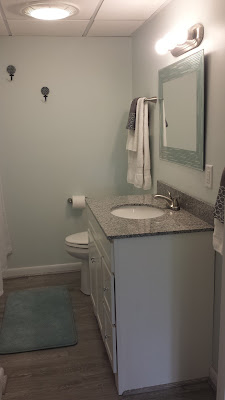 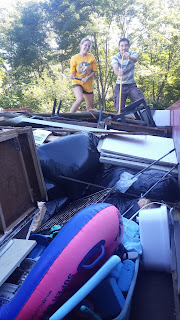 June 20 thru July 31, 2017 - Holy Dumpster, Batman, The Sequel.
This photo of Joie and early housemate Rob standing atop a mountain of trash was taken 3 years ago, following the first cleanup efforts at Chateau de Joie.

It was hard to believe that one house could have any more trash to discard...until the problems hidden behind the walls and floor coverings began making themselves known via leaks and mysterious odors.

For the first time since Joie & Marilyn have been in residence, the downstairs apartment was to be completely empty for a few weeks, so it was decided to replace the old carpeting, bathroom fixtures and cabinetry and, hopefully, figure out what smelled so bad. So they did some shopping and ordering, lined up their favorite contractors for the work they couldn't (like plumbing and electrical) or didn't have time to do (like laying 800+ sq,ft. of plank flooring) and had our second dumpster delivered.

In their delusional optimism, they opted for a smaller one than the first. A month into demolition, they realized their mistake but there was no way to swap it out.
The giant tetris game is going to have to be in play once again. 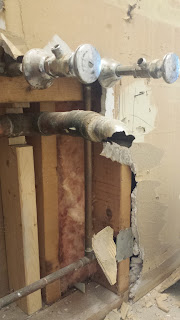 So, where did all that trash come from? It turned out that beneath all the old carpeting was very thick, rubbery padding (which answered a piece of the smell question) and beneath that were a gazillion tiles, all of which had to be removed before planking, appropriate padding for a concrete floor and new carpeting could be installed.

And then there were all the bathroom and kitchen cabinets and fixtures which had been concealing rotten drywall and behind the drywall was questionably filthy, pink fiberglass insulation, broken pipes (like the one at right) and rotten wood... (sigh). At least, there was no longer a question of where the unpleasant odor originated from. Joie and Marilyn had no choice but to gut a great portion of the apartment down to the studs.

As you can see from the pic at left, Marilyn seemed to think demolition could be done without making too much of a mess.


Luckily, former housemate Katherine and colleague Adeline volunteered to help crash the bathroom that had the worst problems. Both ladies only asked that they be allowed to use the crowbar and slam the sledge hammer against something that dared to resist. Cussing out loud was a secondary request. Both requests were happily granted! 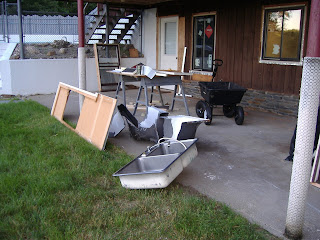 The cast iron tub turned out to have more resistance than any of the ladies imagined possible. Our Main Man, Contractor/Magician Ryan Regan-Ladd had to take over the sledge hammer to get the job done.

Obviously, the idea of updating the entire apartment within a couple weeks was as delusional as our choice of dumpster size. In the posts following this one, you'll see how Marilyn, Joie and a wonderful crew of subcontractors raced against the clock to get everything ready for the next round of graduate student housemates.
Posted by Marilyn 'n' Joie at 3:51 PM No comments: