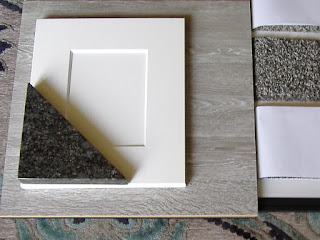 June 13, 2017 - It's been a long time since we had any renovation progress to report but a lot of brainstorming and "window shopping" was going on in between Joie's intense academic schedule and Marilyn's completion of several new novels.

A lot of decisions have now been made and materials have been ordered, so work will be commencing again next week. As projects get underway, we promise to take plenty of pictures and tell stories of our mishaps and successes. All we have for this update post, however, is a pic of the samples we've chosen for the downstairs kitchen...
The flooring in the entire great room will be a gray composite wood planking, which we will install ourselves. A lot of new, solid white cabinets with black & gray granite countertops will replace the handful of makeshift boxes, cracked formica and three old, unmatched rolling carts. That work we are leaving to pros. New, standard-sized, black appliances have already been delivered. The three bedrooms will soon have speckled, shades-of-gray carpeting. 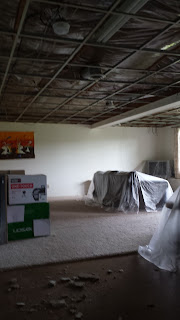 You may recall that, shortly after we moved into Chateau de Joie on June 30, 2014--yes, we really are inching up on our 3rd anniversary here--one of our first projects was to make the downstairs apartment safe and habitable for housemates. We removed all the commercial fluorescent lights, filthy drop ceiling (and the decaying matter concealed above it) and installed new white sound-absorbent tiles and recessed lighting, replaced broken interior doors and bifolds with standard ones , converted a mud room into a bedroom suite, drywalled window-sized openings between rooms, and  did a lot of clean-up, painting and patching.

Three years later, this area is again at the top of the reno list but all the changes and updates about to take place will take the space from above-average rental space for the area to outstanding livingspace.
Posted by Marilyn 'n' Joie at 2:02 PM No comments: