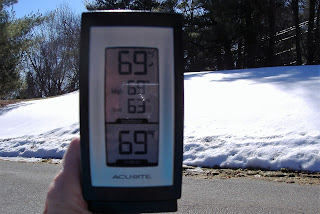 February 24, 2017:  A just for the record post...because someday in the future we'll wonder if this really happened.

The last post reported on the big snowstorm that lasted a week. That was less than two weeks ago. As you can see, there is still plenty of snow on the ground from that storm, it's still February, usually the worst of the winter months, and yet, the thermometer reading was in the high 60s yesterday and again today.

But the really big sign that winter may already be coming to an end -- Joie & Marilyn have a mighty case of spring fever. Although, yes we would like to go a little wild and crazy, but here at Chateau de Joie spring signifies the launch of a new round of renovations. We've been getting estimates on new windows, new siding, new roof, new kitchen, new garage door, new screened-in upstairs porch, reconstructing Marilyn's portion of the upstairs...

Obviously we would have to win the lottery to do all of that over one summer, but there's just something about the high temperature in the face of two feet of snow that has us thinking ANYTHING is possible!
Posted by Marilyn 'n' Joie at 3:03 PM No comments:

February 13, 2017: Mother Nature lured us into complacency last month with minimal snow and temperatures in the 40s, but she certainly gave us a swift kick in the past week. The snow storm started on the 8th and just kept on going through the 12th. The plow driver had to work his way through our driveway every day in order for everyone to get in and out.

Plus, Joie and Marilyn had to continuously shovel a few gazillion tons of snow followed by salt to keep the walkways and stairs safe. Special acknowledgement must be made to housemate Katherine, whose snow shoveling abilities rival that of the plow. And,of course, an area had to be kept clear for the Chateau's Princess Sweetie to do her business (though she still resists as long as possible). 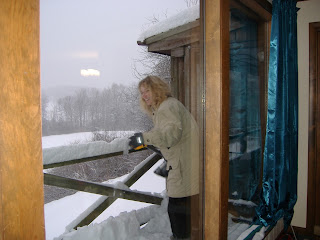 Midway through the storm, it was necessary for Joie to climb out a window to clear the snow off the flat roof before it caved from the weight.


We will never forget contractor/friend Ryan's warning that the multitude of acorns that fell in the fall signified a harsh winter coming up!


There is more snow coming in a day or two, but meanwhile we're trying to enjoy the "pretty" views out our windows.