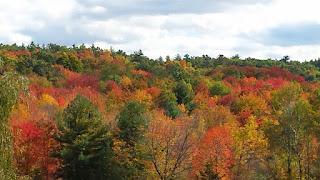 September 30, 2016: Something is very wrong. The calendar and the dropping temperatures say we are officially in the Fall season. There are even leaves falling off trees. But those leaves are mostly brown.

Here's a photo of the hill behind our house, taken  on September 30, 2014, our first Fall season in Massachusetts. 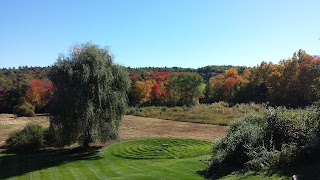 And here's one with the labyrinth from September 30, 2015 (after field mowing). 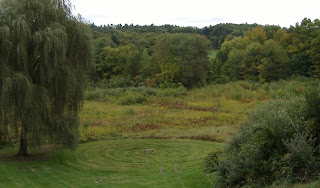 And here's the one Marilyn took today, September 30, 2016. We're told the minimal snowfall during last winter, followed by the drought all summer is to blame for the difference. While we wouldn't mind another mild winter, the fabulous Autumn Showcase is one of the magical things about this place. 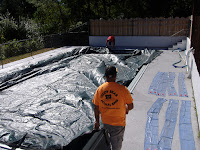 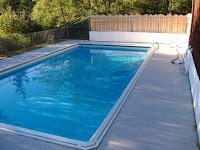 The autumn indicator that remained the same is the "closing" of the swimming pool. Coming from Florida and Texas, we had never heard of a pool being closed or open. Much to the sadness of Joie, Katherine, Chloe, Chuck and Adeline (who were willing to pose for a group farewell photo but academic obligations made organizing that impossible), here's how it went. 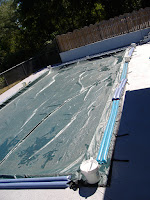 Ah, well, the positive note is that the cover comes off as easily as it went on.

In case anyone noticed that the fence has not yet been stained (like our dear Ryan), we swear it's on the schedule for next weekend...unless Mother Nature has another surprise in store...like a premature snowfall.
Posted by Marilyn 'n' Joie at 10:19 AM No comments: