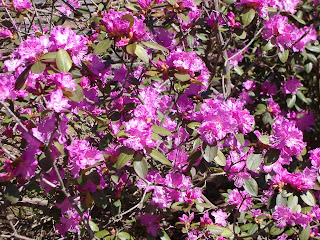 April 28, 2016: As expected, the rhododendrons were next to bloom, but they are a month early and the snow a few weeks ago obviously reduced their display but they're still a joy to see!

Not sure what will burst forth next...maybe the lilies, or the crab apple tree, or the tulips, or the lilac tree...in any event, there's plenty more coming up.

Though the repair and reno list is lengthy, everything must remain on hold until Joie gets past her comps... 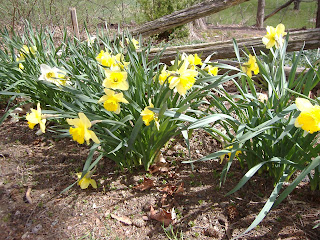 April 19, 2016: They made it!
The freeze and heavy snowfall after these little ladies had already started to show off had us very worried that this spring would be colorless, but Mother Nature delivered another surprise. Rhododendrons appear to be up next.

(No renovation news to share yet...just wanted to push the last wintry photo down from the top spot!)
Posted by Marilyn 'n' Joie at 3:31 PM No comments:

April 4, 2016: To everyone's - even area veterans' - complete surprise, 5+ inches of snow accumulated between dawn and dusk! Seriously, are Mother Nature and Old Man Winter having a battle for supremacy or what?! Needless to say the baby birds and flower buds were in shock as well.

The weather authorities called it Snow Storm Ursula and, similar to the villainess in "Little Mermaid", it packed a wallop! We had no choice but to shovel & salt paths & stairways for tenants and dogs in the early morning and again in the late afternoon. Our plowing service had already pulled up all the border-marking stakes so we also had to shovel a 1/4 mile of driveway edges to show them where it was when they came by at the end of the storm.

There were two things to be very relieved about tho - all the electrical work that was done when we first moved in kept the power flowing without a flicker and the new furnace kept everyone toasty warm despite the freezing wind gusts.

So, what do you think the gals from Florida did when the blizzard stopped and all the shoveling was done? Well, we got out the boogie boards and hit the back yard slopes with Sarah & Chelsea! At one point Marilyn even caught some air...right before getting a face full of snow. Getting wet, cold and breathless from the return climbs was totally worth the half hour of squealing and giggling. Unfortunately, Jake wasn't here to film the fun but here's the evidence of great sledding! 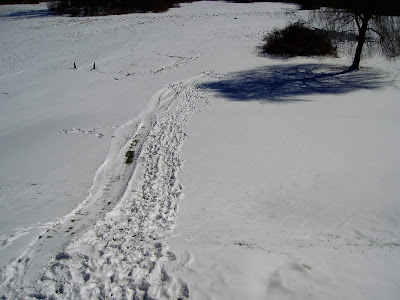 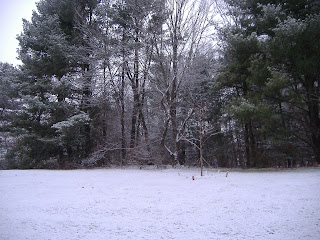 April 3, 2016:  Just a note for future reference. Mother Nature is still toying with us...dumped an inch of snow during the night.

During the day yesterday, the temp hit 74, Joie took a break from her comps reading to scoop up a few pounds of leaves off the swimming pool cover and Marilyn announced she would be washing windows next week. Perhaps it should be interpreted as a nice little excuse for putting chores off a bit longer.
Posted by Marilyn 'n' Joie at 2:09 PM No comments: