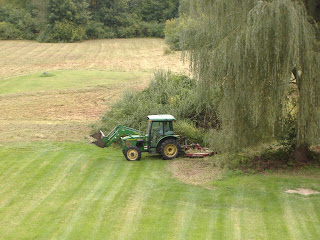 September 29, 2015: We had a major unveiling today!
Thanks to Mark of Sokoloski Landscaping, a good portion of the "back yard" got a haircut for the first time since we moved in last summer.

Although Joie had to be at school, Marilyn, Milkdud and Sweetie were entertained for hours as the brush hog cleared acres and acres of weeds, reeds and other undesirable plant life.
Of course the ecosystems that house the deer and other resident wildlife were left untouched. Here are a few before, mid and after pics:


If you look closely, you might be able to see a few autumn colors creeping in, but a lot of the leaves have been simply turning brown and falling to the ground, so we're not sure we'll get the magnificent display we had last year. At any rate, we'd better take advantage of the cleared land to actually walk the entire property...before that white stuff comes back.
Posted by Marilyn 'n' Joie at 3:03 PM No comments: 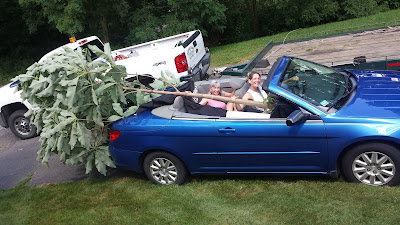 
But it's not just any old tree. This one has a history that makes it quite special. In the mid-1800s, a Magnolia tripetala (common name Umbrella Magnolia) was uprooted in Kentucky and replanted in Amherst, Massachusetts by Edward Dickinson. Although Edward served in the Massachusetts Senate and both the U.S. and State House of Representatives, he is also known for being the father of Amherst-born poetess, Emily Dickinson. That original, and quite magnificent, tree still stands on the Emily Dickinson museum property. 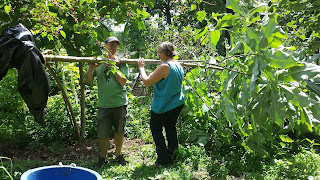 The tree we were given is a grandchild of that first tree. It grew up on the property of one of Joie's PhD comp committee members, Professor Laura Lovett. She not only offered Joie the tree but she and her partner took care of digging it up and settling it in our car.

As we've mentioned previously, we do not yet own a pickup truck and the offer of the gift had a time constraint, so we improvised. You can surely imagine the smiles and waves we got as we hauled our 15+ foot long cargo at 10 miles an hour for the entire 2.5 mile trip that took us thru the UMass Amherst campus! 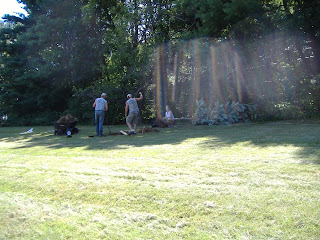 We considered ourselves even luckier when we arrived at our house and saw Jerry and Kevin, the wonderful, accommodating, super-efficient lawn care team from Sokoloski's Landscaping, South Deerfield. With a slight readjustment in their to-do list for us, they were able to help us dig a sizable hole. Since a good deal of the barrier mound in front of our house is solid rock, we held our breath as the shovels broke through the grass in the spot where we really, really wanted to plant the tree--a straight view from the kitchen window--and gasped as our good luck streak continued. 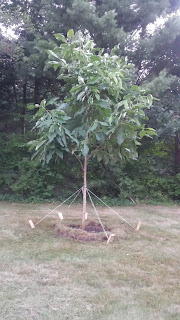 Still improvising due to the need for speed, we used some of the leftover wood from the fence construction as stakes. The guys pounded those blocks into the earth around the hole's border and Marilyn drilled holes into the wood. Then Joie and Marilyn had the honor of setting the tree in place. Still using what was immediately on hand, drapery cording and rubber insulation were used to anchor the trunk to the surrounding stakes.

The next five weeks had us sweet-talking Maggie into surviving, covering the root area with compost and uncovering it to make sure the soil bed got fresh air, feeding her coffee grounds and keeping her damp from top to bottom. But the 85-90 degree afternoon temps and brutal sunlight fought our efforts. 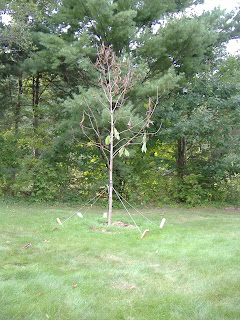 Too soon, most of the leaves turned brown and fell.
Most, but not all. Plus there are a number of green buds on the bare branches, so we're pretty sure Maggie is a survivor...just like her new foster parents!

We promise to let everyone know if she makes it through the winter.
Posted by Marilyn 'n' Joie at 5:49 PM No comments: 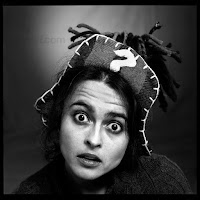 September 6, 2015: Mad Marilyn strikes again! Is nothing safe from her path of destruction? Ummm, not really. Especially not if it's a rotting, critter-attracting eyesore. Besides, she's already confessed to receiving great pleasure from demolishing stuff.

Some of you may recall that the house we purchased was previously used as a daycare center. Last summer we managed to tear down all but one of the multiple pieces of heavy-duty playground equipment scattered across the property. Swings and see-saws and monkey bars and climbing ropes...they all got chopped and dumped! 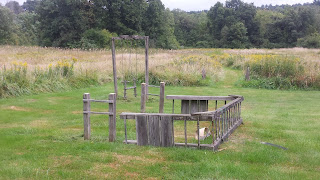 Here's a reminder pic we took part way through one of the crashes. 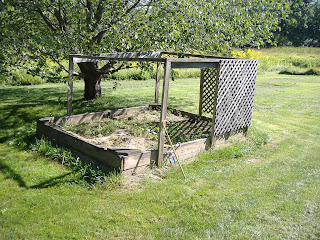 Only one thing had been spared--a giant (12'x12') sandbox under the red maple. Its elimination had been postponed because we'd considered using the existing box and frame for a little vegetable garden. But when we learned how much more work such a project would add to the already impossible to-do list, we tossed that idea.

Still, what were we to do with all that sand?

The answer came as we were digging out the ridiculous fence posts mentioned previously. We could use some of the sand to fill the deep holes and the rest could be dispersed to the depressed areas on the property that tended to hold water after it rained. 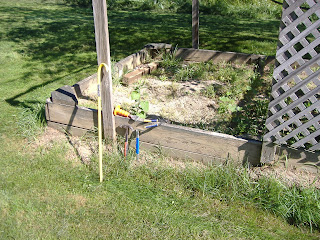 Soooo, with a fiery gleam in her eye, Marilyn headed down to the sandbox, armed with a variety of tools. As it turned out, the wood was so rotten and the screws and bolts so rusty, all she needed was the crowbar and a few decades of repressed rage.

The sand was filled with ants and spiders and snakeskins, toy shovels, trucks and molds, plus a stray 4x4x4' block of wood.

Oh, and lots of weeds. However, amid all those weeds, Marilyn was given a deep purple promise of future beauty... 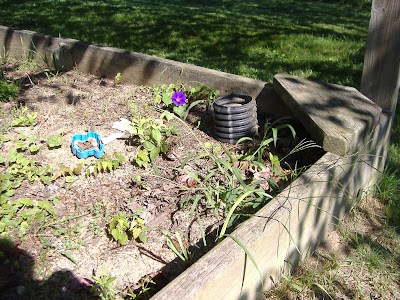 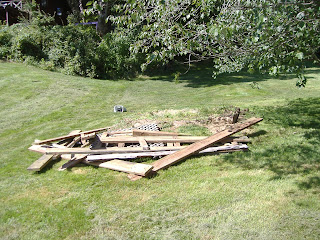 Thanks to the condition of the wood (& Mad Marilyn's penchant for violence), the demolition was completed in half a day...despite the 3x12x12' boards buried deep in the ground that formed the foundation for all the other boards and trellis which were secured by so many bolts and screws, we're pretty sure The Incredible Hulk must have been one of the children attending the school.

Cleaning up the weeds and trash in the sand only took another hour.

BUT, hauling all that heavy wood up the mighty hill to the trash heap in 90+ degree heat...well that took several days. However, a big shout out to our housemate Sarah, who took an hour out of her uber-busy getting-ready-for-back-to-school schedule to lend a hand. 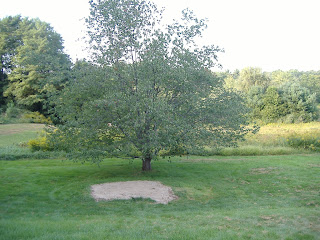 Dispersing the foot-high ton of sand could take months since Joie has now switched from her Reno Queen tiara to her full-time doctoral student cap and Marilyn can only manage a bucket at a time by herself, but we have a plan for that newly cleared area come Spring!

At the moment, we're imagining two or three purple Adirondack chairs and footstools and a small light green table to set the wineglasses on...


May - August, 2015: A different kind of pole dance!    Okay, so we've mentioned THE POLES and THE CONCRETE several times already...mainly because anything we were trying to improve outside was dependent upon eliminating one or more of the damnable fence posts. Considering how deeply they were sunk and how much concrete had been used, they were clearly intended to withstand the end of time.


The very first one was dug out by Marilyn as she was trying to create an unobstructed path for our housemates to get to the lower level.

That was back in May...and there were 13 more to be removed. Since each pole removal took at least two hours and an inordinate amount of energy regardless of what tool was used--and we did have a lot of other projects going on--we ended up averaging only about one pole dance a week. And it wouldn't have even been that good if it wasn't for the additional help we repeatedly received from our cher amie Adeline! 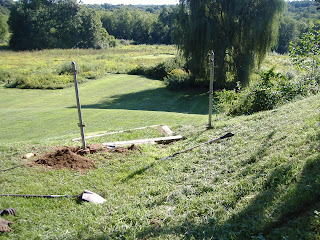 On August 31st, there were only two poles left standing and, given it was the last day Joie could do any more reno work, it was IMPERATIVE  this particular chore come to an end.


So Marilyn dug the deepest trenches she could manage around the last resistors, then Wonder Woman Jo-Jo huffed & puffed and yanked and yowled... 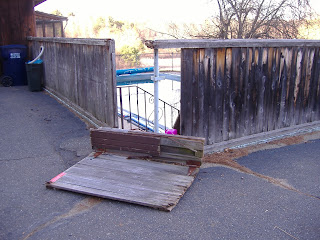 June-August, 2015: We built a fence! It took all summer but we finally finished it.
That noise you hear is Joie and Marilyn giving raspberries to the couple of men who looked skeptical when we mentioned our intention, with a one-finger salute to those who actually smirked and informed us we could NOT build a fence.

To be perfectly honest, however, we did receive guidance from our favorite sorcerer, Ryan Regan Ladd, who has been kind enough to allow us to serve an apprenticeship under his tutelage. Because we don't own a pickup truck or a really big table saw, we also had to depend on him to bring us the wood (altho we did help load it all onto his truck at the lumber yard) and cut it as needed. 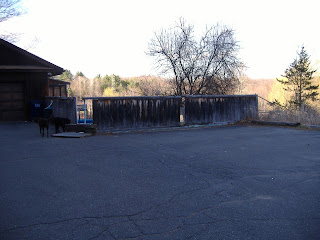 First, we want to tell you about the original fence, circa 1965. Obviously it had to have been very well-constructed to last 50 years. Metal fence posts were anchored into the concrete wall on the two public sides of the pool. Huge bolts were used to secure the horizontal boards to the poles The vertical slats had wood spacers on each side and fit tightly into narrow grooves cut into the base and top 4x4 cross-bars.


Unfortunately, after we took possession of the property, the rotten wood began collapsing a piece at a time, until it became a top priority.

Despite the rotten and carpenter ant-destroyed sections of wood, it took days to remove all the rusty bolts and pieces of wood that had literally petrified to stone. Then another week was filled with scraping off the many layers of old paint and rust on the poles and repainting them with a flat granite shade of Rustoleum. At least we didn't have to install new fence posts! 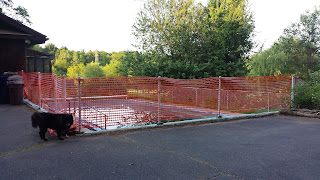 At this point, Ryan again came to our aid with a great quantity of orange plastic to prevent animals or sober people from falling down onto the pool deck. 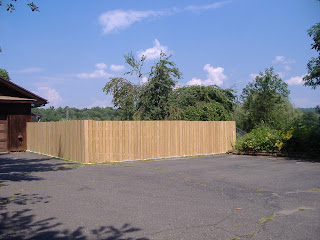 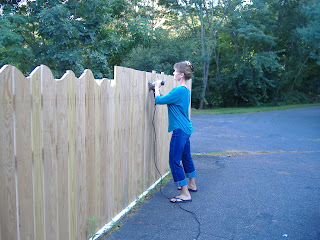 Ryan loaned us his jigsaw and gave instruction but Joie did the cutting and Marilyn did the sanding.


Since we used pressure-treated wood, the fence cannot be stained or painted for a year, but we may need that long to decide what color it's going to be. After the tire swing makeover, we're kind of into whimsy, so anything goes! 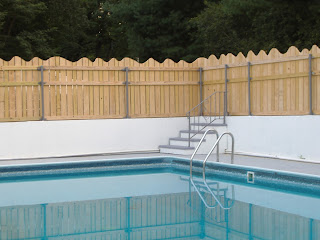 We promise to post a final-final photo of the fence...along with our super-secret plan for the concrete wall around the pool next summer.

By the way...we're posting this on September 1, 2015, which makes this the one-year anniversary of the Rural Renovation Diary blog! We're not sure how the year flew by so quickly...guess we've been too busy to notice :)
Posted by Marilyn 'n' Joie at 7:06 PM No comments: