August 12, 2015: Woeful to Whimsical in 5 (sort of) simple steps!
Some of you may recall that the property we are renovating was once a preschool, with A LOT of playground equipment made of sturdy 4x4s secured in several feet of concrete. Last summer we managed to remove all but two of those structures. The disposition of each of those reminders of earlier times are deserving of a post of its own. 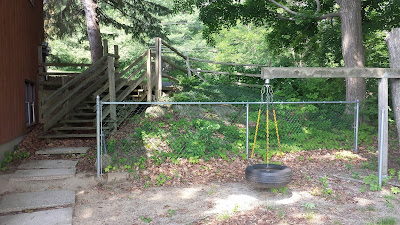 Today's subject is the sad old tire swing on the side of the house by the downstairs entrance. The reason it wasn't torn down with the rest is that its frame is bolted into a giant maple tree and we weren't certain how the tree would handle the separation. So, instead of dismantling it, we decided to add it to our summer outdoor renovation list.

1. This was the hardest and most time-consuming step. We had to clear the area around the tire swing, which included removing more chain link fence and concrete laden poles and resetting the cockeyed concrete stepping stones.
2. Next, the entire wooden frame got a good scrubbing with concentrated wood cleaner to remove the decades of mold, dirt, moss and algae. To our complete surprise, the wood looked brand new an hour later.
3. While the wood dried, the chain was cleaned and painted with white Rustoleum and the tire was painted a bluish-green.
4. The frame was primed then painted a happy shade of purple.
5. A healthy Boston Fern was transferred into a large, light green pot and inserted into the tire. 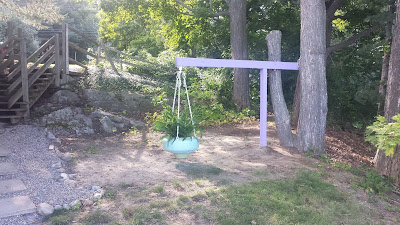 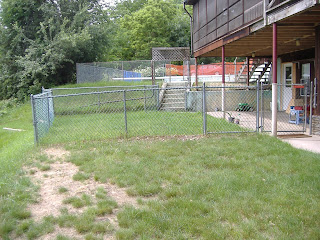 July - August, 2015: Step by step, inch by inch, slowly we turn...
...the property around. A few blog posts ago, we announced the completion of the pool renovation. However, in order to truly finish the job, much of the work we'd done around the pool had to be extended into the adjacent area. Here's a "before" pic.

The fenced area here was originally for pet use...but our Milkdud wasn't able to navigate the 2 flights of stairs to get down there from our living space. Thus, there was no need for the chain link fence or 3 obstructive gates. 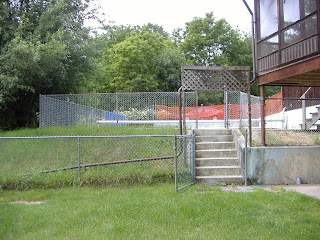 Removing the tall, non-functional, lighting pole and associated electrical wiring was done by Bussiere Electric. Tearing down the chain link part of the fence was not that difficult for Jo and Marilyn, but removing the poles, which had each been planted in two to three feet of hundreds of pounds of concrete, was another one of those cussing and screaming jobs that cher Adeline had to help us with. (No pics because there were so many such poles all over the property, we decided their removal deserved a blog of their own.) 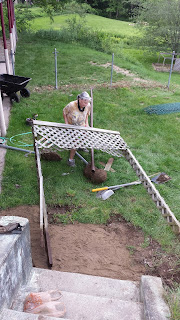 The rickety old wooden trellis, that sort of camouflaged a gutter going over the pool stairs and down the back hill, had been a target of so much speculation and derogatory comments, Marilyn took great pleasure in pulling it down without the aid of tools. 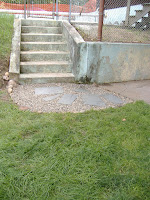 At the bottom of the stairs, we discovered a nice surprise buried in the dirt--slabs of flagstone! Digging those out and adding some of the pebbles we had left over from our other downstairs patio project, gave us a good start for this area clean-up!


Once the stairs and downstairs patio area were cleared of extraneous fixtures of all sorts, the stairs, walls and last section of fence were treated to the same loving attention the pool area had received. 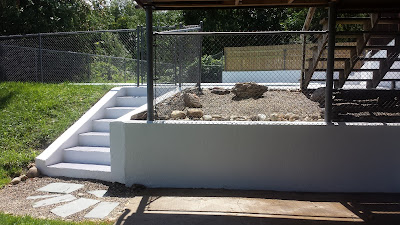 The walls were primed white and the weed patch between the two stairways was converted into a rock garden to show off the gorgeous pieces we keep finding. Special thanks to Ryan Regan Ladd for donating a few grand examples from his yard!

It's been a long, hot summer, with plenty of interruptions and unexpected challenges, but it's a delight to finally be able to show off what we've accomplished instead of just telling what we planned to do! Huge thanks to all those who have let us know they've been enjoying our stories! 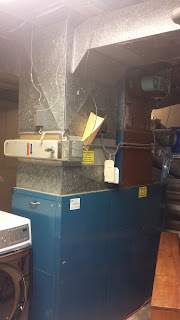 March-August, 2015:  Bigger isn't always better...especially when the bigger thing is also over 50 years old.
Before you get the wrong impression, we're talking about the furnace and cooling system in Chateau de Joie. Our first winter was enough to let us know the system had to be replaced before the temperature started falling again. But the age and inefficiency of the heating unit wasn't the only problem we had in the basement. It was so packed with equipment, we were forced to put our washer and dryer on opposite sides of the basement.

Interestingly, the original owners were quite ahead of their time. Not only was it highly unusual to have a central air conditioning system in the 1960s, they also had a pool heater, humidifier, electronic filter, etc., most of which hadn't functioned in decades, but they were all very large and taking up extensive floor space. 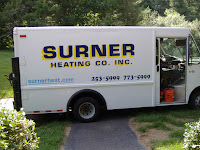 Deciding exactly what we needed versus what we wanted and could afford took several meetings with the Surner Heating Company reps and a considerable amount of time and paperwork to take advantage of a MassSave rebate and loan program, but it all finally came together in a practically perfect way.


To the right, along with the brand new equipment, are Joe and Steve, our super-efficient (and oh-so-patient) techs/installers from Surner.

And below is our personal Surner rep, Scott Nicholas, who held our hands through the entire process. At the last minute, he noticed a big barrel hanging from the ceiling (purpose unclear) and cheerfully helped Steve take it out to the growing metal trash heap in the back yard. 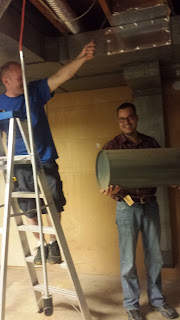 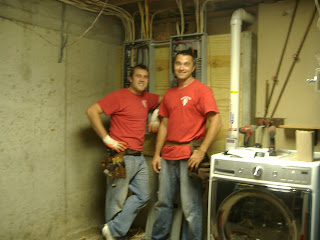 But that's not the end of this story. the happily-ever-after came when our two favorite Bussiere electricians, Serge & Vitale, arrived to complete all the necessary electrical work, including hooking up the dryer in its new location...on top of the washing machine. (The stacking part was a major favor on their part and we were most grateful.)

The hardest thing we had to do on this job was carry an unused, long table downstairs to serve as a folding station. Too bad they aren't all this easy :) 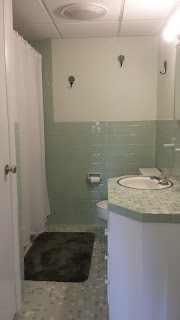 But we had no choice. Once our super-hero tenant Ben let us know something was wrong with the tile on his shower wall, we had to acknowledge an urgent problem while in the midst of renovating the pool area.

You may remember this pretty picture of the renovated downstairs bathroom and how pleased we were over how inexpensively we had refurbished the unappealing room. What we didn't know was the amount of damage that was lurking behind that new white shower curtain. 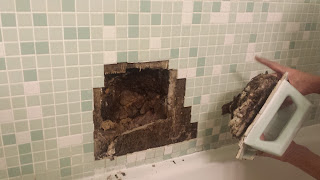 Perhaps Marilyn shouldn't have scrubbed quite so energetically or used quite so much Clorox during the cost-effective renovation, but as Joie poked at the tile Ben had referred to, the soap dish fell off the wall. Once we glimpsed what had been growing behind the tile (apparently for decades), we knew what had to be done--the rest of the moldy wall and rotten wood had to be removed, cleaned up and rebuilt...immediately! 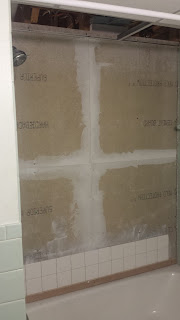 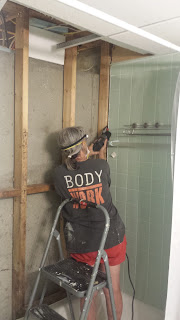 Eight hours later, Jo and Marilyn had cleared the wall down to the studs and replaced the rotten boards.

The next morning, our favorite sorcerer/carpenter/builder, Ryan Regan-Ladd, came to our rescue with the proper cement board and lessons  regarding building a shower wall and measuring, cutting and applying the new replacement tile. 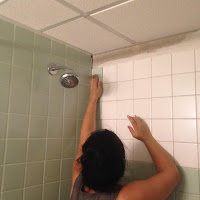 And keeping the magic going, once again, notre amie Adeline showed up to lend a hand.


Grout, caulking, and an overall clean-up the next day and...voila! Ben had his shower back again, with an updated look. 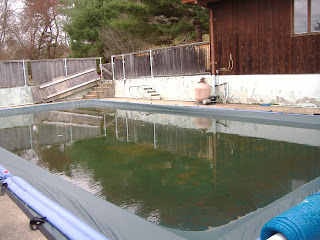 June 24-August 10, 2015: EEK! SNAKES! Why did it have to be snakes? Joie isn't afraid of much, but snakes, even small, skittish, helpful mouse-eaters, turn her into a quivering mass of insecurity. Thus you can imagine how she reacted when Mario and Wayne, the men installing the new pool filter, discovered at least 2 MASSIVE nests beneath the coping of the pool. Think of the scene from the first Indiana Jones movie & you'll get the picture! It was almost enough to have her swearing she would NEVER go swimming again. (BTW, she even refused to allow Marilyn to post a picture of a nest.)
But those brave, competent men chased all the slithering creatures into the woods and cleaned up the residual snake skins.


Besides that, Mario and Wayne, who work for Teddy Bear Pools, did a phenomenal job of removing the dead filtration system from the pool deck, setting up the new one inside the garage and triggering the clean-up of the green pool water that had been stagnating through the winter and spring months. A lot of chemicals, brushing, vacuuming and scooping of leaves and decomposing animal carcasses (seriously!) was needed to get the water back to sparkling. Unfortunately that only made it more obvious how unappealing the rest of the pool area still was! 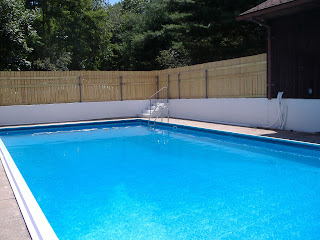 Amie Adeline gave us a very creative idea for how to make the walls totally unique. We're keeping that a secret until we actually do it but at least we were able to prep the walls for that project by stripping and scraping multiple layers of mildew and peeling paint, then priming everything white. (Pay no attention to the new fence in the background as it's not quite finished yet and we have a separate blog planned for that project when it's completed!)

The clean new walls had us looking at the rusty chain link fence that bordered the other sides of the pool, so the next step was cleaning, sanding and spray-painting that aspect.

Admitting that we are just a tad obsessive when it comes to our reno projects, our attention was suddenly focused on the faded coping and the old concrete deck itself. How could we NOT freshen up those elements as well? 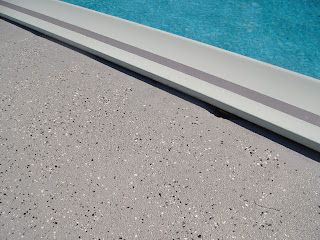 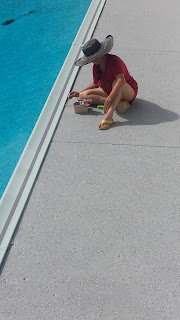 Lots of shades of gray paint were selected and applied but adding the sparkles was what made it Campbell special.

In case you're wondering how we got those lines so straight...that's Marilyn under the big hat, using an artist's brush to get the finish just right.(Shout out to Gail DeYoung--thanks for leaving your hat behind!) 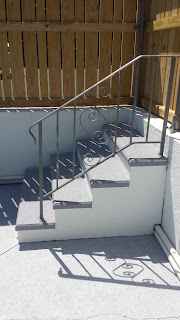 With the old fence gate eliminated, the refinished steps and railing will make the perfect spot for several pots filled with colorful blooms.

Finally, 6 weeks of hard labor later, the pool looked inviting enough for Joie to forget about the snakes and enjoy the water!

Since it's been awhile since this post started, here's a reminder of what we started with...