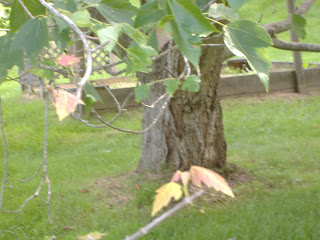 We're a bit confused. On September 13, 2014 we posted a photo of the first leaf on our property to turn color from green to red. It was on a red maple tree. Today, amidst 90+ degree heat, our attention was grabbed by that same tree suddenly showing a dozen bright red leaves, two of which had already fallen to the ground. 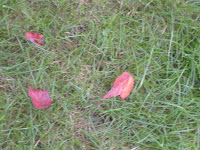 Is this a sign of an early fall? An even earlier winter? The end of the world? The tree has the flu? Or is someone playing a trick on the Florida girls? 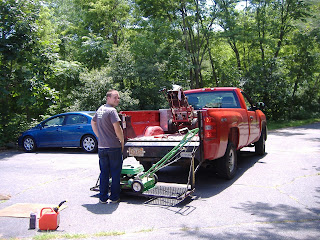 On a much less confusing issue, the rusty old lawn mower we inherited from the previous owner finally cut its last blade of grass. It served us well last summer but we had no choice except to replace it. So we went shopping at Boyden & Perron, the trusted, local, long-time, family-owned lawn care store where we'd bought our Echo weed whacker last summer. It only took a few minutes for us to settle on a shiny red Toro hot rod.  It was delivered and the old one was taken away by Tim, who did his best to show off the company's official logo on his t-shirt. 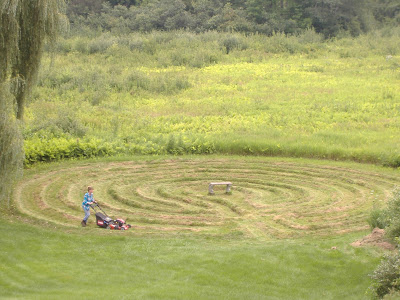 And Joie wasted no time breaking in the Toro with a walk around the labyrinth! If you look closely, you might note that the fashionista is sporting a flannel shirt and work boots!

Meanwhile, the reason we haven't posted any work progress pics is that, although we've been toiling on several related outdoor projects from dawn to dusk every day, not one of them is ready for an "after" photo. But we're getting very close now, so please stay tuned.
Posted by Marilyn 'n' Joie at 5:08 PM No comments: 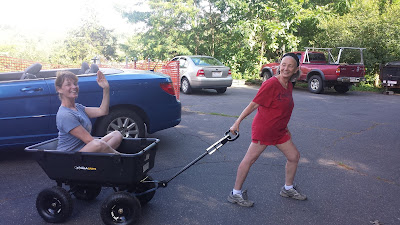 June 27, 2015: Who's the boss? Although we tend to take turns with that title depending on the task, this pic shows who was in charge of our downstairs patio renovation. Since this job involved moving a ton of stone off a trailer and down a hill, it was imperative we invest in the right hauler. Because of the rough terrain and lack of magical powers, we chose a Gorilla Cart with 4 fat tires and dumping ability. But first we had to personally test out its maneuverability.

The subject patio is at the foot of the stairs leading from the driveway to the downstairs rooms so it was imperative that area be clean and safe. Removed before the photo at left was taken, was a gate that blocked the passage. Eliminating the gate barely presented a challenge, but it and the unexplained chain-link fence were secured by metal posts planted 3 feet down in an incredible amount of concrete. We're still working on digging out those monsters.


Here are a few more before pics. 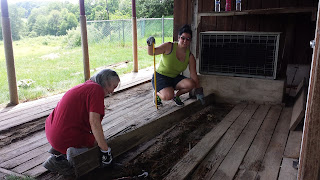 Jo's colleague Adeline donated her time, strength and wonderful exuberance to help remove the rotten wood. To make the job more difficult, the top boards were securely nailed and screwed into long 4x4's planted in the dirt, plus there were 2x4's and  mystery panels screwed into the house, the patio roof and above the a/c unit, all of which had to be lugged to the growing wood pile several hundred feet away. (See previous blog post "Got Wood?")

Once the patio deck was cleared of rug, wood, miscellaneous chunks of concrete and rodent nests, it was aerated and covered with fine but porous screening and framed with stone edgers. The strange fence and obstacle gate were removed, the uneven slabs were reset and cleaned, and weeds were removed to show off some of the beautiful rock formation on the hillside. 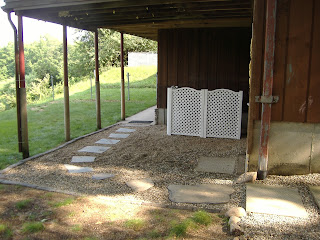 Finally, we were ready for the stone. We imposed upon the services of the wonderful builder Ryan Regan-Ladd and his truck and trailer to pick up and deliver a ton of decorative rocks. But the unloading, hauling downhill and spreading was all done by the Feminist Fatales...Adeline, Joie & Marilyn.

The finishing touch was hiding the a/c unit with decorative lattice panels. 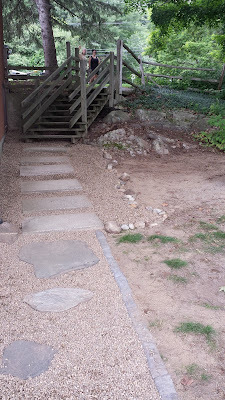 BTW, the dimness of the photos is due to the gorgeous, but sun-blocking maple tree canopy. Still to come is the planting of a lot of shade-loving ground cover for the newly cleared section at the foot of the rock mound...and maybe a waterfall...

If you look closely, you'll see Marilyn & Adeline at the top of the stairs waving TTFN despite the effort it took to raise their exhausted arms...